Natural Gas Storage and Price, a Journey Back Through Time

The following article, by Richard L. Zdunkewicz of Acclaim Energy Advisors, should give us all pause, as we ponder our energy costs going forward.  With the increasing dependence on natural gas for electric power generation, is it time to reconsider changing the way you buy, consume, and most importantly waste the energy you are paying for? 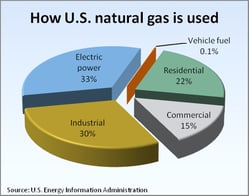 It is well known that those of us in the business of trading or buying natural gas (and power for that matter) anxiously await the weekly natural gas storage reports issued by the Energy Information Administration. In fact, in my office there is friendly wagering amongst our price risk management and consulting staffs on exactly what the level of inventory build, or draw, will be.

As we approach late summer 2016, I am intrigued to look back on what has happened with natural gas storage and the NYMEX contract price action going back to the beginning of this decade. We all know that price action of the NYMEX contract is influenced by many fundamental and technical factors, but my focus here is the pace of inventory build and what it might mean for prices the remainder of the year.

As of July 29, 2016, total natural gas in storage was 3,288 Bcf and roughly 16% higher than the 5 year average of 2,824 Bcf. This year, the average weekly build since the beginning of storage season, (or when we would expect inventories to start to increase) averaged just about 41 Bcf each week. For some perspective: the average weekly inventory build since 2010 is 68 Bcf with the highest level at 87 Bcf in 2014 and lowest in 2012 at 46 Bcf. This summer’s low average weekly inventory build can be attributed to a hot summer across the U.S. and a generator fleet increa
singly fueled by natural gas as compared to coal.

So when looking back through the historical pace of inventory build, what might we expect for price action for the remainder of this storage season? Currently we are on pace for an average build similar to that of 2012. This storage season, the 12-month forward strip price (typical fixed-price contract) started at $2.44 /MMBtu and has since risen to the $3.00 - $3.10/MMBtu range, an increase of roughly 25%. If we were to see similar price action to that of 2012, we might expect a price at the end of storage season in the range of $3.50 to $4.00/MMBtu, or the highest 12-month strip price we will have observed since the fourth quarter of 2014.

The next couple of months should be very interesting in the natural gas market, and with our friendly wagers!  If you would prefer to manage this change rather than gambling on it, TBO and our partners at Acclaim Energy Advisors are ready to meet with you to develop a plan to audit your energy consumption, evaluate your current contract situation, identify waste, and execute changes required for your continued success.