In our first two posts on organization culture, we looked at the macro elements of culture and the key elements that had to be understood before effective culture change 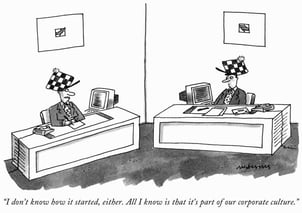 is possible. In this post, we look at how individual team members can impact culture and some of the change options available to counteract the culture impact of bad actors.

How many times have you seen the effect a toxic personality has on their team, work mates, family, and others?  Frequently these people are extremely talented but referred to as “complicated” – meaning that they are talented and achieve tangible results, but their behavior is not always consistent or maybe even rational. What are the tip offs?  Ever hear any of these: “I just couldn’t control myself,” “I’m the only one around here who really contributes”?

Organizations may put up with such people simply because they are the most creative, the biggest revenue generators, or just not easily replaced…very obvious benefits. What may not be as obvious, however, is the negative impact on the organization and its performance.

Serious corporate introspection is needed. We suggest individual and group behavior is symptomatic of the culture practiced day-to-day and accepted ways of doing business are the root causes.

We had a long-time client with a senior executive who was exceedingly creative with deal structures, giving them a real advantage in the marketplace. That person, however, was as disruptive in the organization as he was creative; always trying to manipulate or bully people and generally not viewed as someone you would like to spend time with on or off the job. Whether to survive or to follow what appeared to be a pathway to success, other individuals and then the entire organization mimicked the behaviors, resulting in a highly toxic culture.

How do organizations deal with such individuals? When the toxic situation becomes routine behavior, there are two options: 1) intervention or 2) removal of the toxic person. Intervention can include coaching, psychological counseling, teambuilding, or development of coping skills for the individual.  Another type of intervention is to move the person to an “advisory” position reporting directly to a key executive that has less interaction with other employees. A great deal of thought must be given to this option to manage the perception of the move – to ensure it is seen as disciplinary (as intended) and not as a promotion (or at least an increase in status). Each circumstance is different and the approach must be tailored accordingly. The second option is removing the individual from the company. But the decision to fire the employee requires corporate introspection. The messaging around the departure typically should go beyond “pursuing other business opportunities.” Recognition is often given to the positive contributions over time. But seldom cited is the importance of enhancing interpersonal behavior. While it is ill advised to link this message with the departing employee, it can easily be included in a discussion of the next steps – “we will be deliberate in our consideration of candidates to ensure any addition to our company embraces our culture and way of doing business.” The replacement decision will be seen as a statement of future direction – either more of the same, or something new.

Back to our long-term client…intervention was chosen with a finite timeline.  Coaching was helpful, but only to a point, because there were deeply-seated psychological issues that could only be addressed by outside professional counseling. A select internal team (including members of our staff) served as buffers and translators to maintain some level of normalcy. Techniques introduced included “awareness” exercises (initially in meetings) designed to highlight behaviors attacking other colleagues. In the end, the organization decided that the disruption was too great and terminated the senior executive.

So insidious is toxicity, that even its remedies may be perceived as negative.  One way to mitigate some of the negatives is to involve outsiders. Our experience is that it is especially helpful to have external team members who do not have to live in the toxic soup permanently evaluating and refreshing the reinforcement strategy. They can be more objective, less judgmental, and more stabilizing than those who are permanent members of the organization.

In any event, if the culture needs to be changed, it is a long-term effort. It is not simply rewording values on the website…or removing one or two employees. Our thoughts on successful culture change efforts will be the next topic in our series.

Have you looked at the personalities that are impacting your corporate culture for better or worse? If you would like to discuss the challenges involved or identify techniques that have worked for your organization, please click the button below.